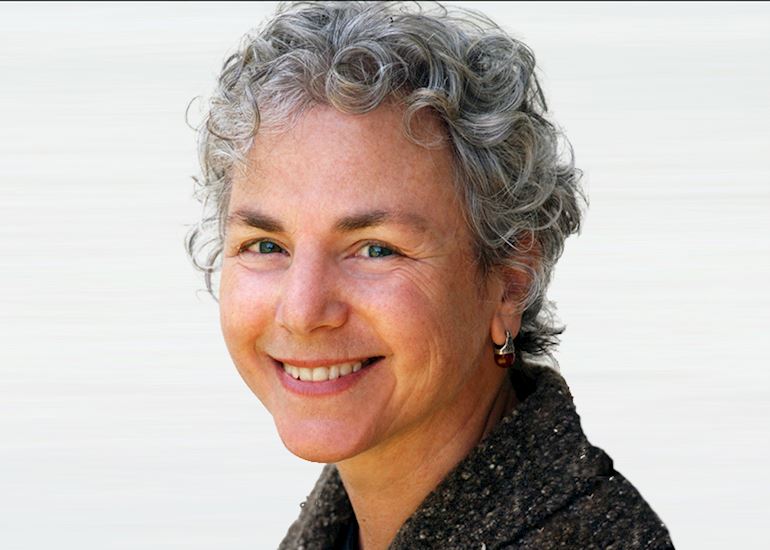 Ellen Bass is a chancellor of the Academy of American Poets. Her poems have frequently appeared in the New Yorker and the American Poetry Review, as well as in the New York Times, the Atlantic, and hundreds of other journals and anthologies. Her most recent book, Like a Beggar, was a finalist for the Paterson Poetry Prize, the Publishing Triangle Awards, the Milt Kessler Poetry Award, the Lambda Literary Award, and the Northern California Book Awards. What follows are two poems from her forthcoming book, Indigo, which will be published by Copper Canyon Press in early 2020.

As I'm walking on West Cliff Drive, a man runs
toward me pushing one of those jogging strollers
with shock absorbers so the baby can keep sleeping,
which this baby is. I can just get a glimpse
of its almost translucent eyelids. The father is young,
a jungle of indigo and carnelian tattooed
from knuckle to jaw, leafy vines and blossoms,
saints and symbols. Thick wooden plugs pierce
his lobes and his sunglasses testify
to the radiance haloed around him. I'm so jealous.
As I often am. It's a kind of obsession.
I want him to have been my child's father.
I want to have married a man who wanted
to be in a body, who wanted to live in it so much
that he marked it up like a book, underlining,
highlighting, writing in the margins, I was here.
Not like my dead ex-husband, who was always
fighting against the flesh, who sat for hours
on his zafu chanting om and then went out
and broke his hand punching the car.
I imagine when this galloping man gets home
he's going to want to have sex with his wife,
who slept in late, and then he'll eat
barbecued ribs and let the baby teethe on a bone
while he drinks a dark beer. I can't stop
wishing my daughter had had a father like that.
I can't stop wishing I'd had that life. Oh, I know
it's a miracle to have a life. Any life at all.
It took eight years for my parents to conceive me.
First there was the war and then just waiting.
And my mother's bones so narrow, she had to be slit
and I airlifted. That anyone is born,
each precarious success from sperm and egg
to zygote, embryo, infant, is a wonder.
And here I am, alive.
Almost seventy years and nothing has killed me.
Not the car I totaled running a stop sign
or the spirochete that screwed into my blood.
Not the tree that fell in the forest exactly
where I was standing—my best friend shoving me
backward so I fell on my ass as it crashed.
I'm alive.
And I gave birth to a child.
So she didn't get a father who'd sling her
onto his shoulder. And so much else she didn't get.
I've cried most of my life over that.
And now there's everything that we can't talk about.
We love—but cannot take
too much of each other.
Yet she is the one who, when I asked her to kill me
if I no longer had my mind—
we were on our way into Ross,
shopping for dresses. That's something
she likes and they all look adorable on her—
she's the only one
who didn't hesitate or refuse
or waver or flinch.
As we strode across the parking lot
she said, O.K., but when's the cutoff?
That's what I need to know.

can be enough to make you look up
at the yellowed leaves of the apple tree, the few
that survived the rains and frost, shot
with late afternoon sun. They glow a deep
orange-gold against a blue so sheer, a single bird
would rip it like silk. You may have to break
your heart, but it isn't nothing
to know even one moment alive. The sound
of an oar in an oarlock or a ruminant
animal tearing grass. The smell of grated ginger.
The ruby neon of the liquor store sign.
Warm socks. You remember your mother,
her precision a ceremony, as she gathered
the white cotton, slipped it over your toes,
drew up the heel, turned the cuff. A breath
can uncoil as you walk across your own muddy yard,
the big dipper pouring night down over you, and everything
you dread, all you can't bear, dissolves
and, like a needle slipped into your vein—
that sudden rush of the world.