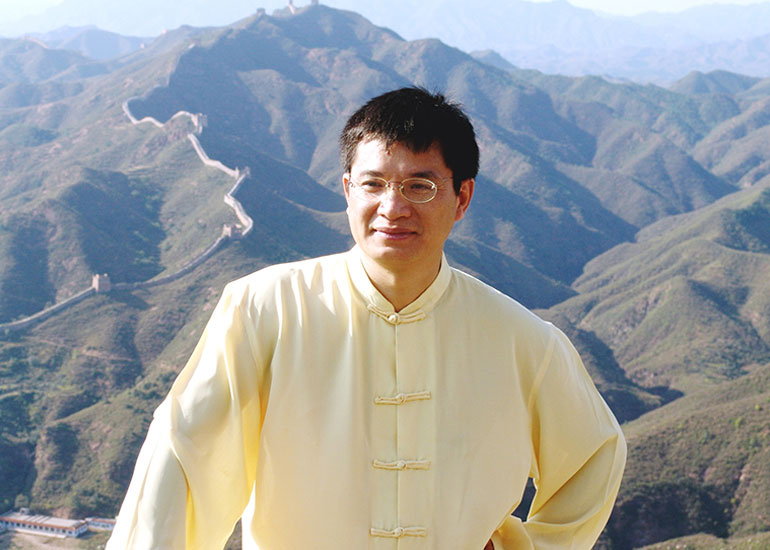 How to Achieve Life Balance with Qi: Advice from Robert Peng

Posted by: Jenn Brown
Robert Peng, born and raised in Hunan, China, is a world-renowned qigong master and healer. He began studying this ancient Chinese art of wisdom, love, and vitality at the age of eight under the legendary monk Xiao Yao. Robert began teaching at the age of 29 and has helped hundreds of thousands find peace, health, happiness, and creativity through qigong.

Robert: Qi is vital energy. It's the most essential part of what makes everything as it's supposed to be—not just the material part, but the spiritual part as well. We are all beings made of the same thing—cells and atoms—but qi is what makes our structure different and makes us different from each other. It's also what makes the whole universe what it is. There are many kinds of qi, like guardian qi (for protection), nutritional qi (from the things we eat, drink, and breathe), prenatal qi (the energy from your ancestors passed on in your genes), and more. All these different kinds of qi come together in different ways to make us who we are.

1440: Could you describe one of those kinds of qi in detail so we get a sense of how it works?

Robert: Guardian qi is the energy that holds all of your cells and atoms together. As we get older, our guardian qi gets weaker. We think we're moving our whole self, but maybe your leg is a little bit behind the rest of you. Guardian qi makes you into one piece so you feel young and flexible. Another function of guardian qi is to offer protection for the immune system. There are things we call evil qi—like wind, damp, hot, and cold—not because they're bad, but because they can be. They can also be nourishing. They become evil when they're too invasive and severe. Like in summer, the hot and damp can make people miserable and sick. When your guardian qi is strong, you can hold this evil qi a lot more. Guardian qi is also what is strong when you see qigong masters do things to show off! When we heat up oil in a wok until it bubbles and then we drop a nickel in it and then pick it out of the oil and hold it in our bare hands without getting burned, that's the protection of the guardian qi. When your guardian qi is strong, you feel at home in yourself.

Robert: The energy itself is not bad or good, it's how you use it. Hitler had very powerful energy, but he used it wrong. So did Harry Potter's Voldemort. When you put a bad intention there, the qi becomes bad. When we talk about good qi, it's referring to wanting to have the qi serve you and make you feel happy and good.

Qigong Empowerments for Wisdom, Love, and Vitality
Robert Peng
As a boy in China, qigong master Robert Peng apprenticed secretly under the legendary Buddhist monk Xiao Yao, who trained him in the martial and healing arts. As part of his training, Robert spent 100 days meditating and fasting in...
Learn More

Robert: We use all of our senses to work with qi, but when we are deep in meditation or when we're doing a qigong healing or practicing qigong, the senses can cross. When I was training, at first I was really confused and my master would tell me to listen to this force or to try and eat that color. He would use language to cross the senses to make my awareness of the energy more holistic. Now when I'm synchronized with a patient, I can feel other people's energy. I may have goose bumps, I may have tingling in my fingers. With some diseases, I feel like my hands are in cold water. With years of practice, you can learn what these things resonate with and then how to follow your intuition, to follow the qi and bring it into balance.

1440: Do you have to be able to sense which qi is which to work with the energy?

Robert: If you're practicing on your own, it's not necessary to have such a colorful experience! In a qigong practice, we're looking for balance in our energy centers, or dantians. We have an energy center in our head that is for wisdom, one in our chest that is the center of loving, and one in our lower torso for vitality. We also have the central meridian, which goes from the top of the head to the perineum and crosses through all three dantians. I call these the four golden wheels—wisdom, love, vitality, and harmony. When you have the energy flowing well, then you are very balanced. The problem is, sometimes they are not harmonized. You can work to harmonize them by cultivating and nourishing your qi.

1440: Can you talk about the concept of effortless effort, or wu wei, and how this can be applied in our daily life?

Robert: Wu means no and wei means action. It's like in breathing—we have breathing in and breathing out, but the more meaningful part is during the pauses between the inhale and the exhale. That pause is wu wei. When you watch the pause between your actions or your efforts, when that space is big, you have more freedom, more ways of adjusting. Here's how my master had me understand it. Qigong is a way of cultivating qi. When you do the exercises, you move the qi ball here and try to channel it there. I was a very diligent student, but he kept saying I need to practice more, like 24 hours a day. I said, "What do you mean?! How can I do this for 24 hours?" And he said, "Don't ask." So he's asking me to do something I didn't know how to do and not letting me ask questions about it.
Finally he said, ‘I know you are working hard cultivating your qi, but you should also nourish your qi. You should allow your qi to work for you. Qi has better intelligence.'
How do you do that? Wu wei.

1440: Do you have a particular exercise for nourishing your qi?

Robert: To nourish your qi, just keep in mind your lower dantian. If you're relaxing, just open up all the pores of your body, like before you go to sleep. We look solid, but we are full of holes, so open up your pores and allow the universal qi to soak in. Then that qi is nourishing you.

1440: What are some of the most valuable lessons you learned from your qigong master?

Robert: He had no ego. He was unpretentious. When I met him, he was in a most difficult time. All his life he had been in a monastery, and then the Cultural Revolution started in 1966. A few years later, he was driven out of the monastery because religion was banned. He worked in my hometown as a boiler room attendant, a very demanding job with not very good pay. He lived in the boiler room where it was so hot in the summer he had to sleep outside with a mosquito net. He had a million reasons to be angry, to be resentful, but he wasn't. He just seemed like a nice boiler room attendant. We didn't know he had this legendary healing power and that he was an amazing martial artist. He just appeared to be nobody and one who served. He was pleasant and he had no ego. I find that if you want to hold something internally that says, "I am somebody," that is very tiring for me. He would say, "It doesn't matter, you just serve the people." Even when he was back in the monastery as a senior monk again to reconstruct the temple, he was still very mild tempered and talked to people without commanding them. He didn't talk much, but when he did he was convincing and people listened. The power wasn't loud and shouting, it was about being sincere.
This interview was conducted on behalf of 1440 Multiversity by Jenn Brown—a freelance writer, editor, producer, and educator. 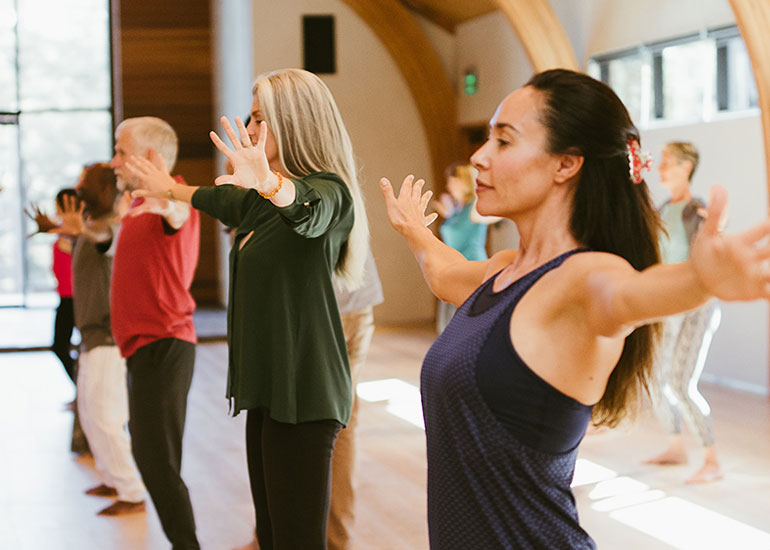 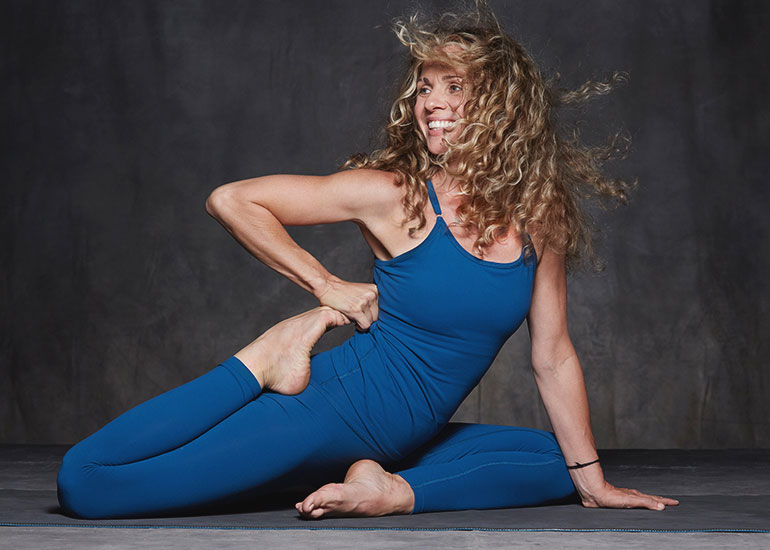 Previous Post
"The Life-Changing Moment for Me": A Conversation with Seane Corn
X