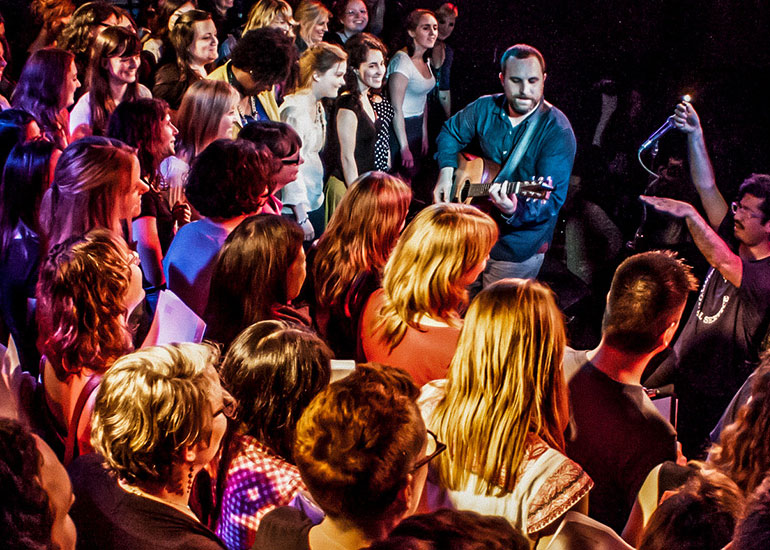 Posted by: Kate Green Tripp
Choir! Choir! Choir! is a Toronto-based singing group led by creative directors Daveed Goldman and Nobu Adilman. The group has performed with renowned artists such as Patti Smith, Tegan and Sara, David Byrne, Rick Astley, and Rufus Wainwright, and onstage at New York's Carnegie Hall and Radio City Music Hall. Since 2011, they have gathered thousands of people—in living rooms, warehouses, and outdoor spaces—to sing timeless, beloved, and popular songs. Their pop-up concerts have become a YouTube sensation. From October 26 – 28, 2018, Daveed and Nobu will be at 1440 Multiversity leading a Choir! Choir! Choir! weekend program.

Nobu: I lived in Halifax, Nova Scotia, for my university years and afterwards. And for me, what defined Halifax was music. It's the kind of place where you don't have to make that much money and you can live pretty well. Everyone's in a band. When we weren't playing shows, all my friends were singing along with my songs. When I moved to Toronto, I was without my friends and I felt more alone in my music. I had this idea of starting a choir. In my mind, I called it a choir of 1,000 voices. And then one day, some friends asked me to put together a choir for a birthday party and they asked Daveed to play guitar. Daveed showed up—we barely knew each other—and instantly it became clear that he liked to tell people what to do and he was incredibly musical. We stumbled through the performance and everyone loved it. There was euphoria in the room that night. It was fantastic. That was about 10 years ago.

Choir! Choir! Choir!
Daveed Goldman and Nobu Adilman
Music has the power to lead us out of isolation, offer comfort and joy, and be the backdrop to our greatest moments. Singing with others connects us more deeply to ourselves, our natural surroundings, and everyone around us in a...
For the next two years, whenever Daveed and I would run into each other, he would say, "When are we doing that choir thing again?" So, I posted a question on social media: "If we started a choir or got people together for a night of singing, would you come?" And the response was overwhelming. So, three months later, we created an invite to an event called Choir! Choir! Choir! The goal was to take two songs, arrange them for many voices, sing them, and that would be it. There was no strategy. We simply made a Facebook event, and all of sudden people we didn't know started asking if they could come. The weekly paper even came. And that night, we sang in the round before a crowd of our friends—about 25 people. We taught really simple arrangements to two songs, Pilot's "Just a Smile" and The Beatles' "Nowhere Man," and it was a wicked fun time. At the end, we said maybe we'll do this again in a month or so and people said no, we want to do this again tomorrow. And that is how it began. For the next year, we did it every week. We agreed there would be no auditions, anyone could show up. We quickly started having to move venues because word was getting out, more press was happening, and it just kept growing.

1440: Let's talk about the two of you and your energy on stage. Who does what?

Nobu: We both love to kibitz. We are both born entertainers. We like being in public situations on stage without much guidance. Humor is also central for us and we use it a lot to get people to open up and feel comfortable. We'll use anything we can to get people excited to sing. Daveed: Once we get into the song (because we talk with the crowd to start), we each play to our strengths. I am a strong singer. Nobu's a very good dancer—he moves well to music—and of course those things complement each other. Sometimes I'm a total jerk on stage and he's the nice guy. We have a brotherly kind of relationship up there and I think people really sense it—they feel us going back and forth in leading the group. Nobu: An interesting thing about how we work is that we don't announce the song/s until just a few days before. We don't want to put together an advance program so people know exactly what to expect. Instead, we want to respond to what's happening in the world. We want to be more immediate. One of Daveed's greatest strengths is musicality and harmony. And we can be as nimble as we are thanks to his ability to create arrangements that are easy, yet complex enough to feel like you've really accomplished something. Daveed: Nobu is basically the conductor so he keeps the audience in time. But with pop music especially, it's less about time and more about phrasing. We jokingly say: Sing unto others as you'd have them sing unto you.
We don't want to sound like a choir. We want people to sing like they are singing karaoke, but learn it together. So much of it is the vibe, waiting to come in on the offbeat, and how you sing the notes. Ultimately, Choir! Choir! Choir! is about the power of music, community, what it is to sing together, what it does for each of us, and how we can learn from being pushed outside of our comfort zone. When people give us an ounce of their energy, we throw back like a thousand pounds.

1440: What two or three words best describe what you see on the faces of the people singing?

1440: What might you say to entice someone to a Choir! night who has never been?

Daveed: If they love music, if they love having fun, and they love laughing, they'll like Choir! Choir! Choir! If they like singing and feeling emotion through music, there's no way they won't like this, because that's what it's all about. Often, people come to a Choir! night and they walk away saying: "It sounded good, but I don't know about those guys." Maybe they dislike our irreverence. Yet, everything we do from the stage is to make people feel like the experience was memorable. If we just went into a room and sang, it would not be the same thing. Choir! Choir! Choir! has taken off in part because of the other elements—the humor, the prodding people to open up, the theatrics. At the end of the day, if people like to have fun and are willing to sing in front of others, they won't be disappointed. This interview was conducted by Kate Green Tripp, Managing Editor for 1440 Multiversity. 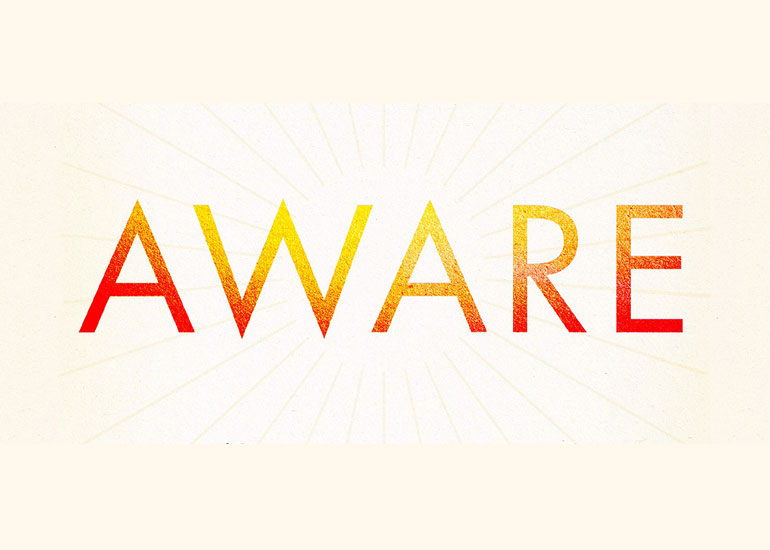 Next Post
Your Mind Can Change the Health of Your Body": Insights from Dr. Dan Siegel 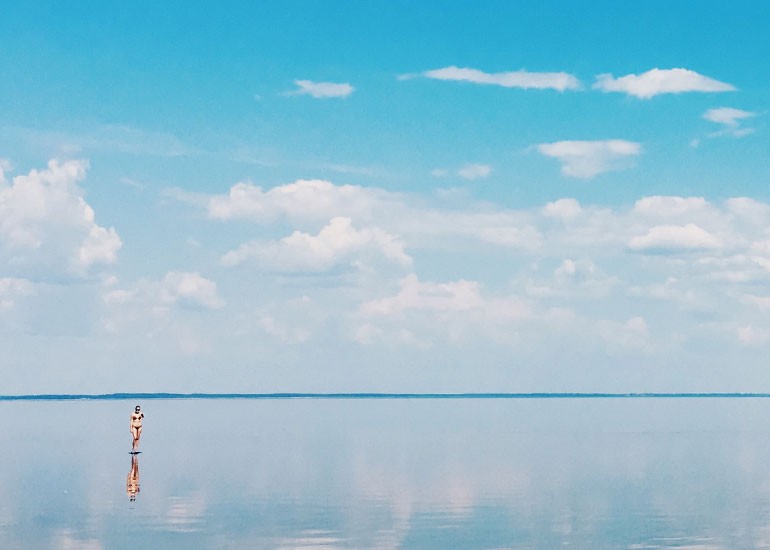 Previous Post
The Importance of Stillness and Inquiry: An Interview with Adyashanti
X